State, economic, and bureaucratic power possess a capillary quality, working their way into the bodies, attitudes, and everyday actions of people. However, power would be ephemeral if flowing only from the top down — as a means to suppress, coerce, or censor. Not restricting knowledge, power produces it. It remains potent owing to its immanence, diffused throughout society, on all levels: at once the means of attack and counterattack, oppression and subversion, didacticism and satire.

At a time when strategies of manipulation are becoming ever more sophisticated, the study of power and the strategies behind the manipulation of images, objects, sounds, and space has become one of the major thrusts of scholarship in Art History, Visual Culture, and Cultural Studies. In this issue, we have taken the theme “(Re)presenting Power” to address the continuing interest in examining power and the forms and strategies with which all manner of media are employed to such ends. With the topic open to all historical periods and cultures, the emphasis is on how representations of power work to maintain, (re)produce, capture, or disrupt power.

The Editors would like to acknowledge the generous support of the faculty and staff of the Department of Art History, Visual Art & Theory. We would like to thank Whitney Friesen and especially Prof. Rhodri Windsor-Liscombe for their assistance and guidance. We wish also to extend warmest thanks to Rob Bos, who freely provided his expertise in website construction and design. Finally, we would like to thank the contributors who worked with us over the past several months, as we prepared the first online issue of Wreck. 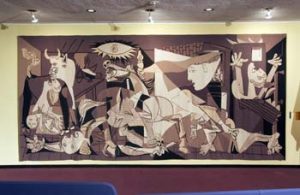 Five years ago, as US forces poised to invade Iraq, the reproduction of Pablo Picasso’s Guernica hanging outside the United Nations Security Council Chamber was covered in anticipation of Secretary Of State Colin Powell’s speech to that body. UN officials explained that the blue curtain would photograph better than the taupe and brown-hued tapestry. But generally it was clear that figures of shrieking animals and anguished civilians did not provide a suitable backdrop for Powell’s call to arms. The supreme irony of this ‘cover up’ was not lost on antiwar protesters, who gathered outside the UN holding aloft small copies of Guernica. Peter Goddard, art critic for the Toronto Star, concluded that “if there is a war with Iraq, there’s already been the first casualty – art.”

Rules of the Road: News Media, Street Art, and Crime 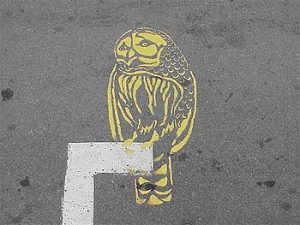 In 2004, the street artist known as Roadsworth (Peter Gibson) was arrested for illegally spray-painting over one hundred brightly coloured stenciled images on roads and sidewalks in Montreal during the previous three years. Objecting to the severe punishment potentially facing the artist, local journalists rallied swiftly to Gibson’s defense. The body of news publications on the Roadsworth case is notable for publicly documenting ephemeral street art works, articulating a critical reception of criminalized art, and instigating debates on the uses of urban space. By analyzing two forms of news reporting on the Roadsworth affair – interviews and art critics’ columns – this paper argues that such writings developed diverse, often conflicting, perspectives toward street art while countering institutionally sanctioned uses and conceptions of public space. Of particular significance to this analysis are the news media’s preoccupation with knowledge of the city, the tensions between art and vandalism, and competing images of the contemporary metropolis. 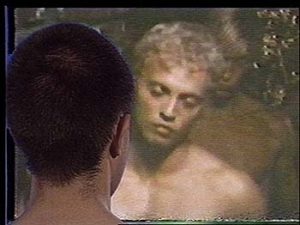 Taryn Sirove maps numerous interventions and contests by artists and filmmakers since the 1980s over the regulation of video and film in Ontario by the Ontario Film Review Board. She examines the ways in which legal and street-level debates have defined and redefined words like sex, sexuality, explicit, obscenity, degrading, and harm. Moreover, the contradictory and problematic license of officially-recognized “art” to skirt decency laws is explicated. In addition to provincial legal contests, Sirove also considers changing definitions of pornography in the criminal code of Canada that provide the discursive logic informing its censorship at the provincial level. She argues that censorship constitutes a requisite “technology of power” and, further, that its agonistic terrain can constitute meaningful social change.

Une voix tranquille: Listening to the Works of Geneviève Cadieux

Geneviève Cadieux, Hear Me With Your Eyes, 1989.
Photographic triptych.

Much of what has been written about the art of Geneviève Cadieux focuses on visuality, as photography is her principal medium. However, two of her photo works specifically implicate sound and take on additional significance in their time and site specificity of Montreal. Even though Hear Me With Your Eyes (1989) and La voie lactée (1992) do not contain an audio component, intertextual references to literature and film in the work reveal important issues with regard to language rights and politics in Canada. The works also contain subtle metaphors that demonstrate how the Roman Catholic Church’s deep- rooted influence continues to have its effect on Québecois identity, society, and culture, even in the wake of the “Quiet Revolution.” Consideration of audibility also assists in exploring ways in which Cadieux’s work reflects the issues informing the separatist movement in Quebec during the 1990s and remains highly relevant in the context of the Parti Québecois’ recent proposition of Bill 195.

The Optic of the State: Visuality and Power in Argentina and Brazil. Pittsburgh: University of Pittsburgh Press, 2007. xv + 256 pp. Jens Andermann