Beauty, Truth, Objectivity, Formalism, Avant-garde. Each of these words represents a concept that at one moment or another carried the weight necessary to form a historian’s vision. As students of Art History – as future Art Historians – we found it prudent to question the notion of the obsolete concept and the role that it can play in the writing and the formation of Art History. Thus, over a period of two days in March 2008, we held a symposium meant to encourage such a questioning. The papers that follow are the product of this symposium. As way of introduction, we would like to offer the symposium’s point of departure: the Call for Papers.

How and why do ideas become obsolete? Are they abandoned as they lose their vitality and social relevance? Are they dropped when they fail to represent the contemporary cultural context? Or when the problems they propose have been successfully resolved? Do ideas just become boring? Are concepts that have been rejected as obsolete forever doomed to describe only the old ways? Or can they later reemerge as politically dangerous positions? Do obsolete concepts ever really go away? Obsolete Concepts: Formative Lingerings is a 2-day symposium held on 7-8 March 2008 and hosted by the graduate students of the Department of Art History, Visual Art and Theory at the University of British Columbia. The conference is aimed at bringing students from art history and the visual arts together with students in other humanities departments to foster cross-disciplinary discussion and debate. We invite papers that re-think outmoded ideas/concepts/positions/approaches – or those whose discarding we anticipate – in order to begin a discussion on why they become outmoded and how they continue to resonate through altered forms. Topics may address, but are not limited to, the following concepts:

As guest editors and organizers of the Symposium, we would like to acknowledge the ongoing support of the faculty and staff of the Department of Art History, Visual Art & Theory. Our thanks to Whitney Friesen for her patient guidance through both the planning of the Symposium and the publication of the proceedings, and to the volunteers without whom the Symposium could not have happened, particularly Carla Benzan, Ashley Belanger, Kim Tuttle, Naomi Sawada, and Michael Windover. A special note of thanks to Serge Guilbaut and Scott Watson who made it possible for Regis Michel, our keynote speaker, to be with us for two days. Thanks also to the Symposium speakers, the respondents, and all who joined in the conversation around obsolete concepts. Thanks to Rhodri Windsor-Liscombe and Katherine Hacker for their assistance in navigating the bureaucracy of the institution when we needed it most. Lastly, we are grateful to John O’Brian and William Wood for their help in the early stages of the symposium’s development.

Five obsolescences currently converge around traditional African art in the West: growing irrelevance of criticism, a perception of lapsed modernity, the white cube’s obscuration of history, no access to performance contexts, and waning government arts patronage. In response, a case is made for exhibition-performance: a two-space forum through which viewers first encounter traditional masks in the Western white cube, then take seats in a performance hall where, throughout the course of a multimedia production incorporating music, choreography, lighting, and projected images and text, professional African performers dance the exhibition’s masks.

‘What Manner of Salutation This Should Be’: The Disquieted Gaze in Fra Angelico’s San Marco Annunciation 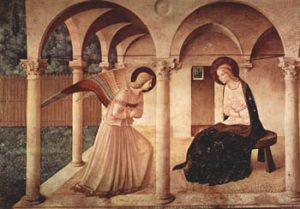 In Fra Angelico’s Annunciation fresco in the North corridor of San Marco in Florence, the Virgin raises her eyes and gazes, warily, at the intruding angel who has interrupted her repose beside a garden. Fra Angelico’s unprecedented composition, centered on the Virgin’s raised eyes that meet the Angel Gabriel’s gaze, is the departure point for this paper, which locates the Virgin in a moment of tension where she “knows not what manner of salutation this should be.” Usually depicted as a yielding vessel with downcast eyes, here the Virgin is shown with a forthright gaze, a rare instance in Renaissance versions of the subject. Drawing on medieval theories of vision, Lacanian ideas of subject formation, and the Dominicans’ particularly embodied way of viewing, this paper positions the Virgin as an important model for Dominican novices’ religious development.

Paris, 1924: Aragon, Le Corbusier, and the Question of the Outmoded 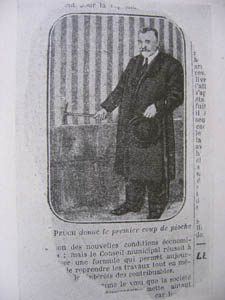 Le Corbusier, Urbanisme, the first strike of the pickaxe

In 1924, two key figures of the French avant-garde published separate and diametrically opposed critiques of the last phase of the 19th century process of Haussmannization that could still be seen ravaging large sections of the right bank of Paris. On the verge of the surrealist outbreak, Louis Aragon rejected the trend of urban renewal in his experimental novella, Le Paysan de Paris, championing instead the potential radicality of the category of the recently old or outmoded. Meanwhile, contemporaneously, the purist spokesman Le Corbusier lambasted the cancerous tissue of the Parisian démodée in his tract Urbanisme. 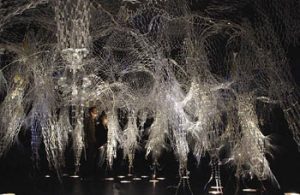 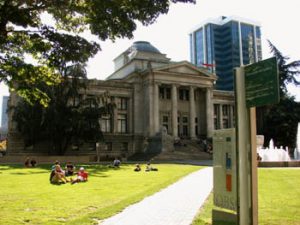 Artist and critic Mark Lewis has stated that public art is “an imperative, a repeated and deliberate articulation”. To this assertion I would add that the term Public Art itself adjoins a further layer of legislation to an already overdetermined practice. The contradictions and tensions that are contained within the union of ‘public’ and ‘art’ are brought to the fore in a millennial public art project of the Vancouver Art Gallery entitled On Location: Public Art for the New Millennium and Ken Lum’s accepted proposal for that project Four Boats Stranded: Red and Yellow, Black and White. The work, as we will find, navigates the difficult terrain between collective consensus and individual imagination, between careful self-representation and direct opposition to dominant narratives, and between the voicing and silencing of contradictions within the genre of public art itself.

The question of agency is an integral component of contemporary Indian artist Nalini Malani’s art practice. One of the most well-known and respected contemporary artists from India, Malani has exhibited her paintings, drawings, video-installations, and theatrical productions in some of the most important national and international venues. She is part of the international circuit of artists from the so-called “Third World” whose works have consistently been included by international curators, biennales, and museums across the globe. In 2007 alone, Malani opened two major solo exhibitions in Dublin and Chicago respectively. Curator Robert Storr selected the artist’s work for the prestigious exhibition Think with the Senses Feel with the Mind at the 52nd Venice Biennale.