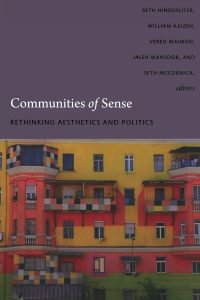 Communities of Sense argues for a new understanding of the relation between politics and aesthetics in today’s globalized and image-saturated world. Established and emerging scholars of art and culture draw on Jacques Rancière’s theorization of democratic politics to suggest that aesthetics, traditionally defined as the “science of the sensible,” is not a depoliticized discourse or theory of art, but instead part of a historically specific organization of social roles and communality. Rather than formulating aesthetics as the Other to politics, the contributors show that aesthetics and politics are mutually implicated in the construction of communities of visibility and sensation through which political orders emerge.

The first of the collection’s three sections explicitly examines the links between aesthetics and social and political experience. Here a new essay by Rancière posits art as a key site where disagreement can be staged in order to produce new communities of sense. In the second section, contributors investigate how sense was constructed in the past by the European avant-garde and how it is mobilized in today’s global visual and political culture. Exploring the viability of various models of artistic and political critique in the context of globalization, the authors of the essays in the volume’s final section suggest a shift from identity politics and preconstituted collectivities toward processes of identification and disidentification. Topics discussed in the volume vary from digital architecture to a makeshift museum in a Paris suburb, and from romantic art theory in the wake of Hegel to the history of the group-subject in political art and performance since 1968. An interview with Étienne Balibar rounds out the collection.